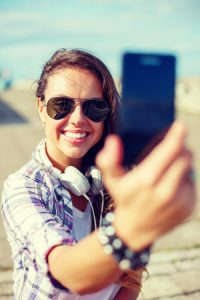 Science-fiction authors have all but exhausted fantastical scenarios in which new technology gives humans the ability to play back and relive captured memories. With the advent of Snap’s Spectacles, however, this idea may become a reality sooner than you think.

The social-media company behind Snapchat first unveiled Spectacles late last year with a soft launch that offered limited availability to journalists and beta testers. Snap is expected to release the smart sunglasses to the general public in the fall of 2017.

In addition to making a pretty bold fashion statement, the Spectacles allow wearers to snap 10 seconds of life, recording footage from the perspective of their eyes with a simple tap on the left side of the glasses. The Spectacles camera features HD quality and a 115 degree field of vision.

Spectacles initially drew comparisons to Glass, Google’s ill-fated effort at making smart eyewear. But compared to the steep $1500 cost of Google Glass, Spectacles will cost a cool $130, putting them in a distinctly different market.

In a stark contrast to the sterile laboratory design of Google Glass, Snap chose more traditional plastic frames to make them less conspicuous and more suitable for everyday wear. In addition to black, Spectacles will also come in electric hues of teal and coral. They also come with a yellow case that doubles as a portable charging cradle.

Snap’s new sunglasses do seem pretty neat, but it’s not clear that they offer protection from harmful UV rays. Plus, we can almost guarantee that those lenses aren’t polarized. Snap’s video-recording Spectacles might make for a cool party trick, but if want a pair of sunglasses to protect your eyes you’re better off looking elsewhere.