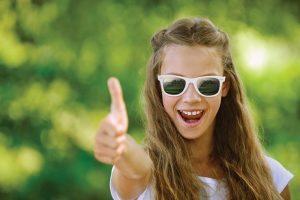 Exposure to UV radiation might be harmful to our eyes, but as long as we wear a protective pair of sunglasses, daylight may actually help to improve our vision early in life. According to an article published by the American Academy of Ophthalmology, new research suggests that natural light could play an important role in the healthy development of children’s eyes. In particular, a number of independent studies have demonstrated that spending time outside can significantly reduce a child’s chance of becoming nearsighted.

One study found that for each additional hour kids spent outside per week, their risk of nearsightedness was reduced by roughly two percent. Another study found that students who were required to spend 80 minutes outside per day at recess were less likely to develop nearsightedness than students who weren’t required to spend their recess outside. A third study conducted in Denmark found that the rate of eye growth in children varied depending on their exposure to daylight.

Scientists still aren’t sure why daylight has a positive effect on eye development, but they have a few ideas. Some researchers think that it has to do with the fact that kids tend to exercise their distance vision more when they’re outside. Others think that daylight might have some unique property that promotes healthy eye growth.

This summer, make a point to get the kids outside so they can play in the sun. Not only will it ensure they get some good exercise in, it could help to prevent nearsightedness as well! Just be sure to protect their eyes from harsh UV radiation with a good pair of sunglasses first.