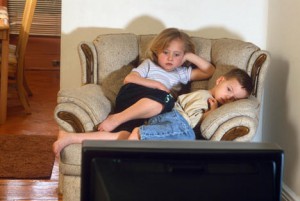 A few days ago we shared tips on how you can teach your child good eye habits at home, and coincidentally we recently came across an article discussing the negative effects of too much TV. The article outlines a study by Australian researchers at Sydney University where they evaluated nearly 1,500 randomly selected six year olds in Sydney. After reviewing surveys completed by the children’s’ parents regarding their TV and computer usage habits, as well as their exercise habits they examined their eyes.

The researchers found that the children who watched the most TV has smaller blood vessels in their eyes than those who watched less and exercised more. The concern is that the smaller blood vessels could lead to poor health over the years. Small blood vessels in adults are often indicators of increased risk of heart disease, high blood pressure and diabetes. It’s unclear whether watching too much TV could lead to later issues specifically from eye damage, but your child could suffer eye damage if there is great strain when watching TV.